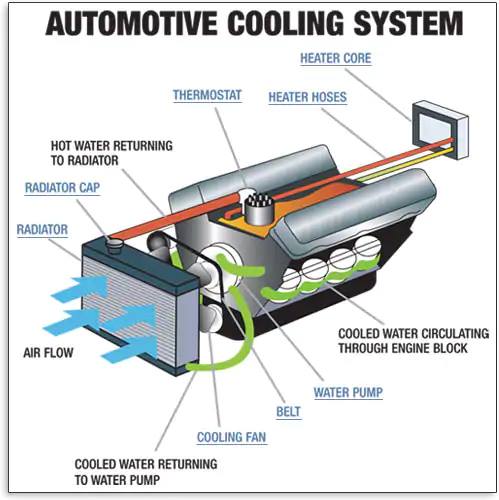 This article will discuss the possible causes for the overheating of an automotive cooling system. On a standard cooling setup that has not been converted or modified, the cooling system will operate correctly and not overheat if the following conditions are met:

Following are the first steps that can be done to fault find an overheating cooling system:

Verify that there is enough of the correct mixture of coolant in the system. It should be filled to the maximum cold level. After a refill it should be rechecked after 1 to 2 heat cycles as trapped air can take that long to be removed.

Check the cooling system for leaks

An automotive cooling system’s operating temperature limit is higher than the boiling point of water at atmospheric pressure. This implies that the cooling system needs to be pressurised in order for the coolant not to boil during operation. If the radiator cap is not sealing or there is a leak, then the system cannot build up pressure and will overheat. Always first check the radiator cap. Best is to replace it with an OE part and check for fluid leakage. If there is still leakage around the cap then it could mean that the filler neck is damaged. Have the system pressure tested and also checked for CO2s in the coolant, which is an indication of a leaking head gasket. The presence of coolant in the engine oil is also an indication of a leaking head gasket or cracked cylinder head.

The water pump in conjunction with the thermostat is responsible for the coolant flow. Both these parts have relative long lifespans. If in doubt replace them with OE parts. Never remove the thermostat or try and slow down the flow to try and improve the cooling. The thermostat regulates the flow according to the temperature of the coolant. It also maintains a positive pressure in the engine (higher than the radiator cap pressure) to prevent localised boiling around the cylinder sleeves.

Breather pipes from the cylinder head and/or the radiator to the expansion tank deaerates the system continuously. Make sure these pipes are not blocked or bent. Trapped air will cause overheating.

Check airflow to the radiator

Without adequate airflow the radiator will not dissipate enough heat to keep the engine within its operating temperature limits. Check the external air fins for blockages. Blockages can be caused by grass, mud or insects. At traffic speeds there are nearly zero forced airflow so the heat dissipation relies on airflow from the fan. Either a mechanical system with a viscous clutch is used or an electric fan. Make sure the fan is fully operational. At highway speeds the airflow has reached saturation point so if the engine overheats at highway speeds the fan is not to blame.

← How to mount a transmission oil cooler.
Call Us